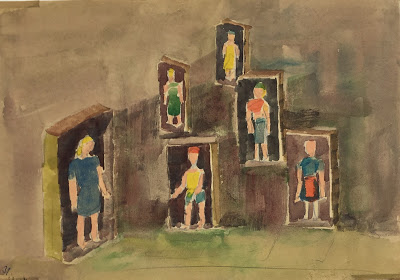 I don’t think I have written a blog post yet where I neither have an answer to a question that I’m contemplating nor an opinion about a possible answer. But this question is different. I have struggled to find an answer to this question. “Why are the Lebanese so apathetic when it comes to issues of Lebanon?” I’m not sure this is the exact wording for the question, but it is something along these lines.

This is not a new question of course. It is one that surfaces every time there is some new scandal that hits Lebanon, whether one that exposes blatant corruption and thievery, custom-developed-and-ratified laws that serve politicians and their henchmen, or a media focus on one basic government service or the other that should have been available decades ago were it not for our ineffective political system and corrupt politicians.

Most recently, the Lebanese watched with barely a word of complaint as each of the political lords (under the guise of their political party or movement) shamelessly presented, rejected, and stitched together various electoral laws, each designed to protect or increase the power and representation of each of them. I doubt that a single Lebanese (except maybe for the die-hard sheep supporters) believed the accompanying rhetoric about the good of the nation, building a modern state, improving representation, or even the talk about improving the status of a particular group of the other.

Accompanying that, the issue of the legislation on adjusting salary scales, which prompted the legislation to impose more taxes. Again, everyone knows that stopping even partially the ongoing corruption, including customs and tax evasion and government bids that get funded at double or triple the actual cost because some official or his relative is involved, would be sufficient to fund the salary scale adjustment without the need for any new taxes. And yet again, no one does anything more than utter a passing complaint.

I used to think that maybe people would in fact be pro-active and would take to the streets to voice their discontent and demand change if only some movement started that had the potential to build critical mass. And yet when last summer a movement did in fact start that organized the most serious protests to date against the government triggered by the garbage crisis (yet another example of basic missing government services because the politicians are all negotiating how to divide its associated financial pie and deals), most people still abstained from joining the protesters. Not only did they not go, they also got creative about justifying why they are not going. They did everything to find faults in the popular movements that were demonstrating and in the young people organizing them. Sure, these young people were not without mistakes; but their mistakes were dwarfed by the corruption and abuse of power of the state politicians they were trying to protest against. And yet people still chose to focus on those small mistakes rather than rally behind them and finally demand to be heard. People still chose to do everything to justify avoiding to demand their rights.

But why? What makes people become so apathetic, so unconcerned, so willing to let go of their rights and the rights of their children, even when it is issues directly related to their well-being such as literally drowning in garbage or having public funds shamelessly stolen?

Many explanations can be put forward. Maybe this is the psychological legacy of the civil war whose scars have still not healed, and whose root causes have never really been fully addressed. Maybe the Lebanese have never really fully embraced their country as a whole (as opposed to always asking each other what part of the country are you from) and never really developed a healthy sense of citizenship (as opposed to a very “healthy but sick” sense of sectarianism). Maybe our politicians have really won the game of making people feel that any attempt to change or improve is hopeless, that those you know are better than those you don’t.

I read somewhere not too long ago that the Lebanese have become experts at living in bubbles of make-believe fairy tales, where they deceive themselves into thinking that everything is OK even as a river of garbage is drifting down their street. There was some psychology jargon name for this disease.

While I am convinced that it has to be some collective social disease of some sort whose nature or name I don’t know, none of the above is a satisfying answer. And yet I have no idea what the answer is. Why are the Lebanese incapable of undertaking mass protests or civil disobedience in the face of their corrupt politicians? Why do they feel so unconcerned, so complacent? Why do they not feel they have a responsibility and a right to demand change by any means available? Why do they go back and elect the same people?

These are not rhetorical questions. Anyone with any answer in mind is very welcome to share. Especially from those who look at demonstrations, and then decide to look the other way.