Mr. Snowtank and the Aurora; the Story of the Lapland trip 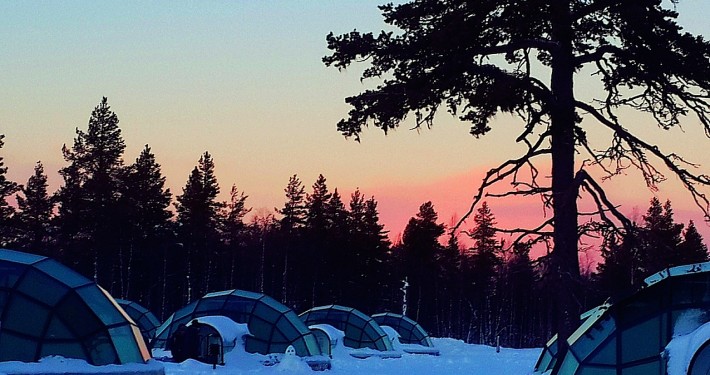 It feels longer, but just over three weeks ago, myself and a group of 21 other people took a trip to Lapland in the far north of Finland. The trip was entitled “Chasing the Northern Lights”, and was planned and organized by my boutique travel company “My Middle East”. The trip included as well a “Finding Your Life Purpose” workshop that was given by my friend Sophia Klotsa Efstathiou.

The program kicked off with a city tour of Helsinki that included the main attractions of the city, both old and modern, as well as various food tastings at the market place. After an overnight in Helsinki, we flew the next morning all the way north, crossing the Arctic Circle and landing in wonderful little snowy Ivalo airport, where we all felt the real adventure was beginning. 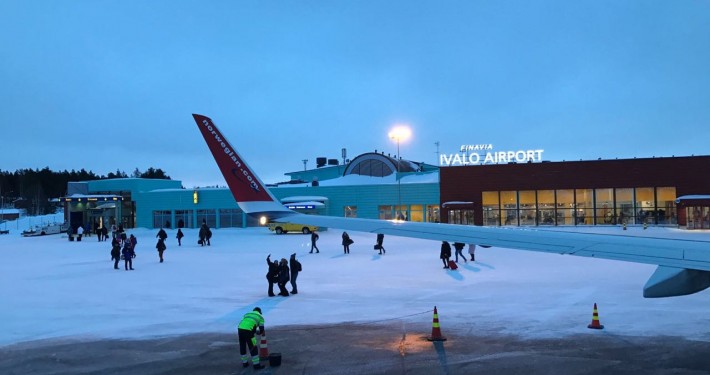 We stayed at the Kakslauttanen resort with it beautiful grounds, glass igloos, and comfy wooden lodges. Our program of activities included a nighttime reindeer safari, a visit to the nearby Saariselka village, an excursion on the snowmobiles, a (slightly cheesy) visit to Santa’s Home and the Elves’ gold workshop, a husky safari, and a nighttime snowtank safari.

The husky safari in particular did not disappoint, delivering a magical adrenalin filled experience, starting from the moment our group moved towards the area where the dogs were waiting, hearing their excited barks fill the air, and seeing their contagious eagerness to start running… Getting zipped on a sledge by a group of fast-running huskies in winter wonderland landscapes illuminated by a golden sun that never rises above the horizon is one of the experiences that will last a lifetime. 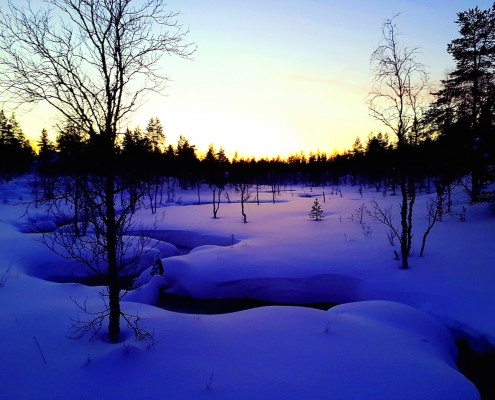 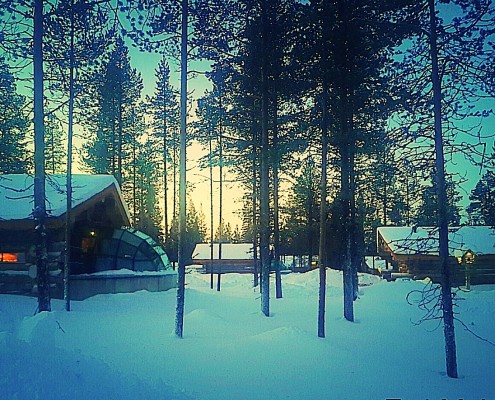 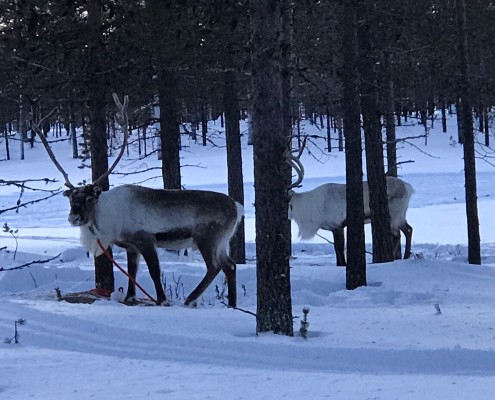 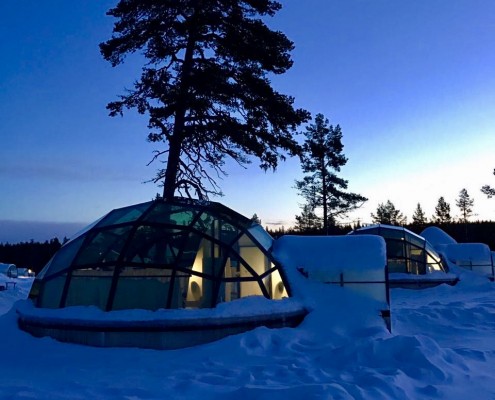 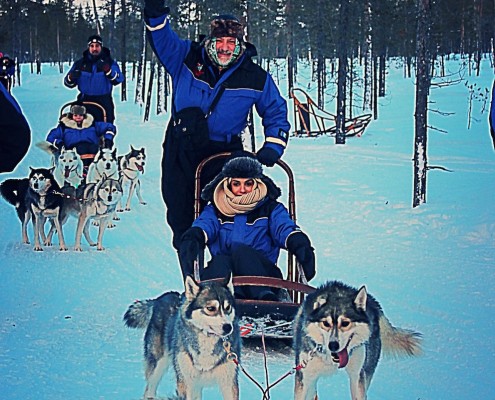 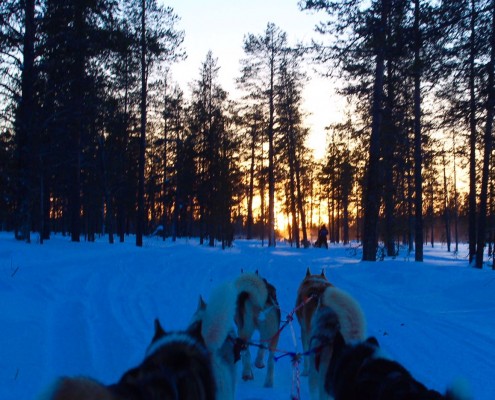 But of course all of this was overshadowed by the main theme and overarching question of the trip: seeing the Northern Lights. Will we seem them? Will the Gods of the Aurora be generous?

Half way through our dinner on the first night, someone screamed “Aurora” and we rushed outside frantically. There they were, faint greenish halos in the night sky. It was the first time any of us had seen them so of course we were quite excited, but rather underwhelmed. It wasn’t spectacular. We felt the Gods can be a little more giving.

On the second night, while walking back to our cabin at around 1 AM, a friend and I caught a rather impressive display of the Northern Lights. They appeared in the far horizon, faint at first to the point where we weren’t sure if that was them or not. But then they appeared to be getting stronger and closer, fading in and out of various locations, and I remember the distinct feeling of being stunned. Yes it was not the overwhelming spectacular all-out display we had seen online in pictures and videos- but still, it was strong enough to leave us in a bit of a spell, to the point where we (embarrassingly) forgot to text any of the others to tell them to get out and look

The show lasted for about 20 minutes, after which I felt satisfied enough to say that I had seen the Lights and can go back home with no regrets. 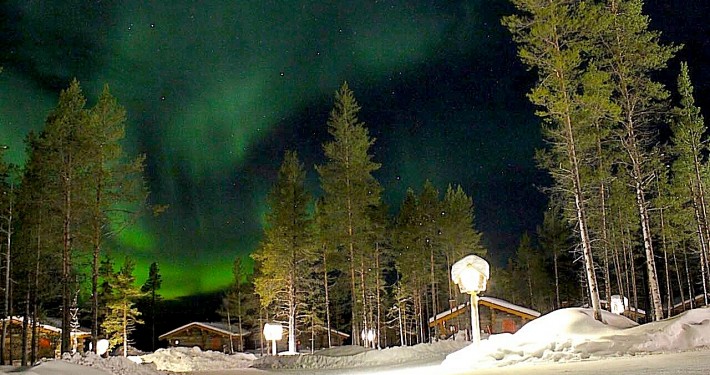 On the third night, we had booked the snowtank aurora-hunting safari. After dinner, a bus picked us up from the resort and took us on a 20 minute drive to the point where the snowtank was waiting, It turned out to be an army tank that had been refurbished by this guy, who I shall call Mr. Snowtank. Mr Snowtank had started a small business that consisted of taking visitors like us in a glass caravan pulled by the tank into the expansive Lappish forests and plains, in search for the Northern Lights. The trip started amidst forests of snow-weighted trees on snow that was literally sparkling in the light of the projectors that the tank was casting towards the sides. At other points, Mr Snowtank would switch off the lights and we would travel in the starlit darkness. It was beautiful. But would we see the Lights??

While he was driving and I was sitting next to him sipping some wine and enjoying the scenery, I asked Mr. Snowtank about his life. Turns out he is a member of the Military Police, trained to take action in the event of a Russian invasion across the nearby border! They knew which roads to block, and where to take the women and children…besides that, he was a single father raising his three boys, and his favorite pastime was to go to a cabin he owned in the forest to hunt and hang out. “Which countries have you visited or would like to visit?” I asked. “I have never been on a plane or even a train…and I have no wish to go anywhere or visit any particular country or city” came the answer that caught me off-guard. Mr. Snowtank entertained in his little business people who have travelled from all over the world to sit in his tank and hope to see the Aurora….and yet he did not have any wish whatsoever to return the favor. There isn’t really any lesson to be learned from this story; it is hard to condone this type of contentment, even if one might be slightly jealous of it. It is just what it is: a man living in the far north of Finland, perfectly content to build his small business, take care of his children, and go spend time in his cabin in the woods. That’s all he wanted to do. 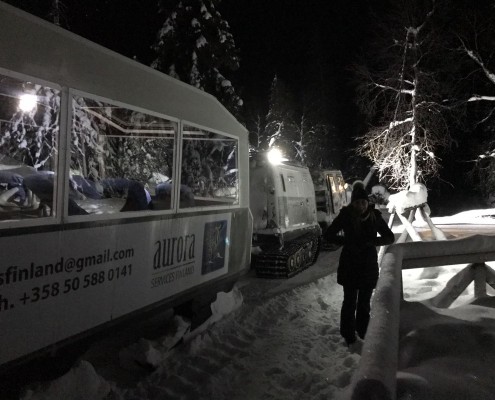 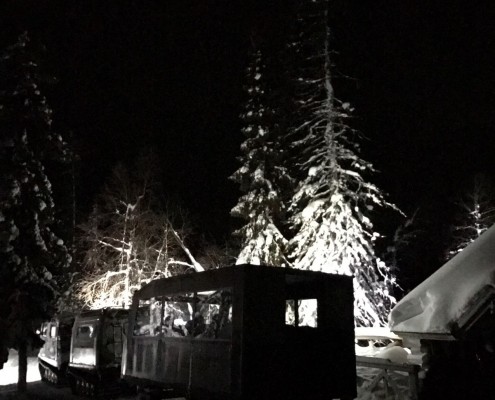 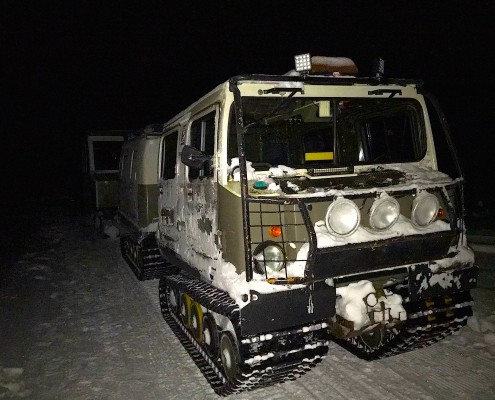 Mr. Snowtank had been driving us for a good forty minutes or so before it all started to happen. Suddenly, the whole big wide starlit sky broke out in a total spectacle of Aurora. We got out of the tank, scrambling with cameras, turning our heads from one direction to the other, trying with disbelief to take in this magical display. The lights were zipping, spiraling, swirling, fading in and out from all directions, in various shades of strong green tinged with accents of yellow, blue, and red. We were in complete ecstasy, experiencing a feeling of spiritual elation coupled with a sensation of oneness with everything. (Maybe I had wine-induced exaggerated feelings, but I do believe my fellow travellers felt the same thing

) Mr. Snowtank, who later took us into a small cabin and built a roaring fire while serving us warm drinks and snacks, delivered. The man who had no desire to experience the world had given us a world-class experience. When later on, in the silence of the forest, we all broke out singing a loud, rather bad rendition of “Those were the days my friend”, I think it was an indirect recognition and acknowledgement that we had all just lived and shared one of the most memorable evenings of our lives. 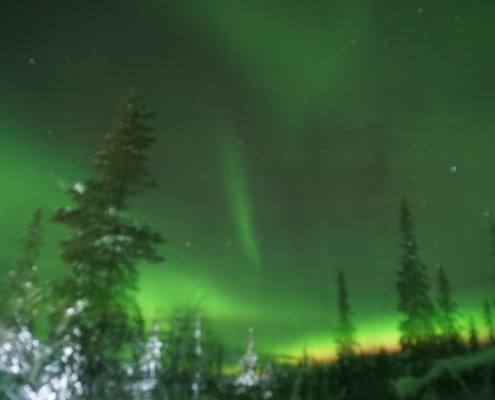 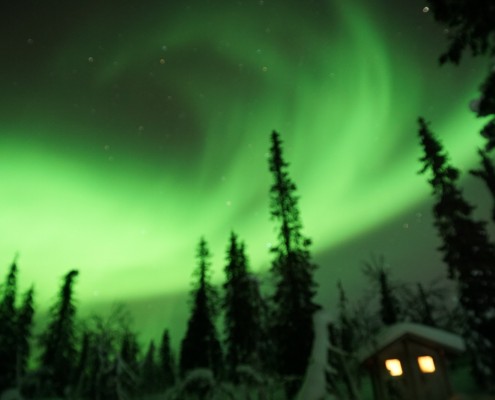 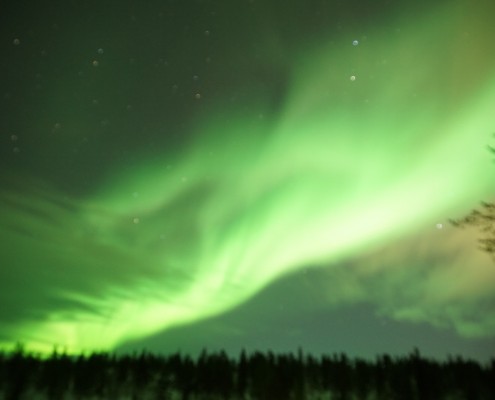 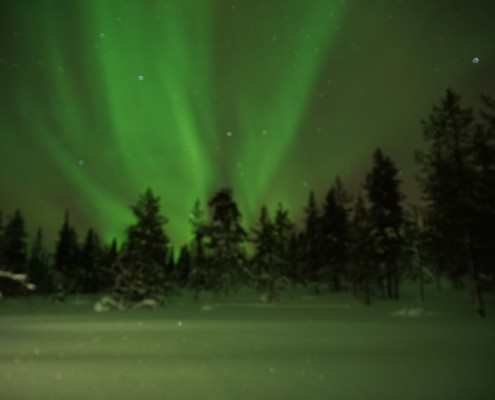 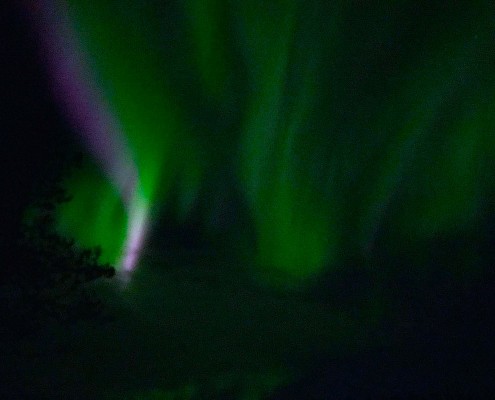 I am thankful to everything that conspired to make this trip work almost flawlessly. Particular thanks go of course to the Aurora Gods and their high priest, Mr. Snowtank. But this trip would not have been nearly the same had it not been for the amazing group of fellow travellers. They were from four different countries and four different continents, from all walks of life, different ages and different temperaments. And yet somehow they all had just the right attitude to make the group come together, creating new friendships among people whose likelihood of meeting was rather low. I am sincerely grateful to them and their good spirits and energy. Together we experienced one of the trips of a lifetime.

PS- “My Middle East” is putting together another Lapland trip in January 2017. Please email for enquiries. 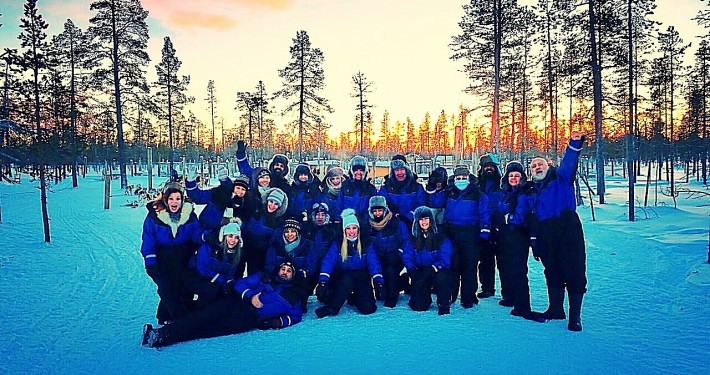 Thanks to my fellow travellers who I know will allow me to use their photos even though I did not ask: