Living in a world where even ST is questioned 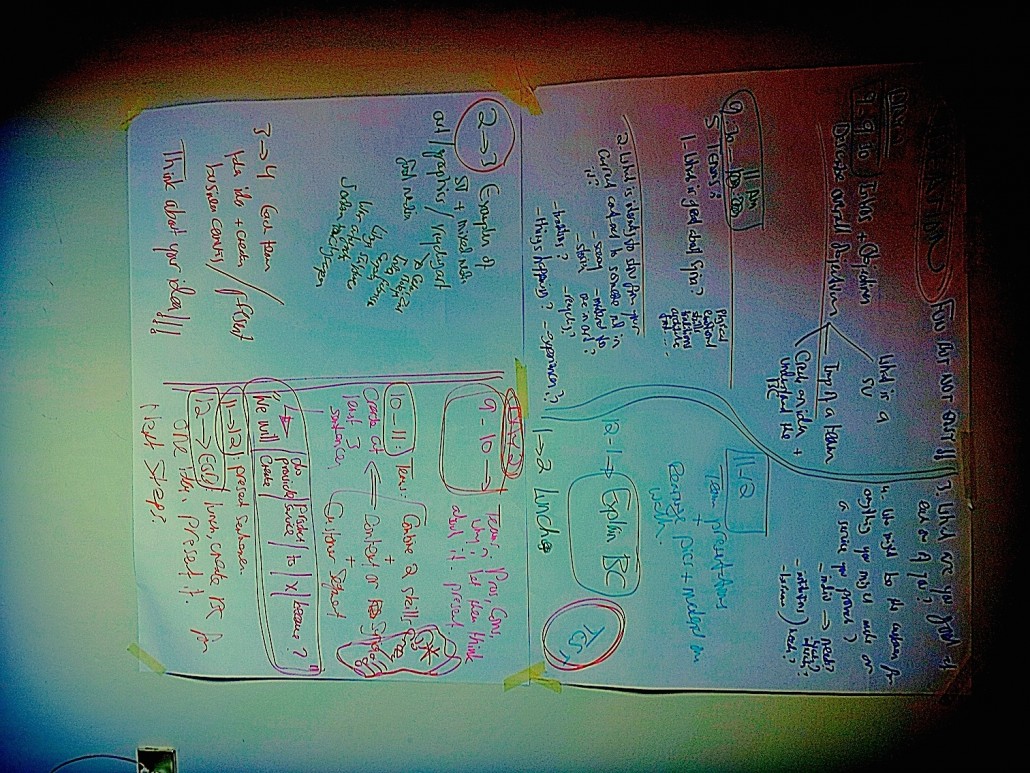 I am currently in the first stages of a consulting assignment with UNESCO that is targeting Syrian refugees in Germany and Lebanon and their host communities. The first major activity of the project involves the design of an ideation and creative thinking workshop that I will be implementing with the target beneficiaries before the end of the month. It is a rather innovative project and more experimental than usual, and I am happy UNESCO is providing me with this space to test it out. The walls of the working space in my current mountain retreat are starting to get covered with what this workshop might be like, as you can see in the above picture.

As the work involves the creation of social ventures, which is something that a portion of my consultancy work revolves around, I was scanning some older presentations and training material I had used in past workshops to see what might be useful for this upcoming one. And suddenly, I came across this slide: 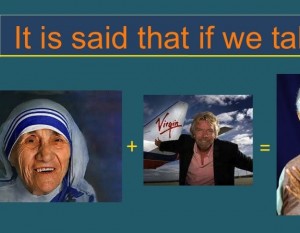 Now this is a slide that has been often used when trying to explain to some audiences what a social entrepreneur might be like. We tell the audience something along the lines of: “What would happen if you took someone with the entrepreneurial paradigm-changing vision and business acumen of Richard Branson, and mixed her with someone who has a total devotion to social causes and an unwavering desire to help those who are poor and in difficult circumstances like Mother Teresa?”………………………………but screeeeech…things now come to a grinding halt!!! Can I still use the example of Mother Teresa?? Is it still valid?? And who could I possibly replace her with?? Michel Aoun?? Nicolas Fattouch??? President Sisi of Egypt??????
I suddenly realised that my world of social entrepreneurship powerpoint slides has just fallen apart- just like the rest of the world is. Last week, in parallel with the official proclamation of Mother Teresa as a Saint of the Catholic Church, articles such as this  and this started floating around the global media, questioning the whole myth of Mother Teresa and her ultra-conservative harsh ways and going as far as claiming she might have actually done more harm than good. “She was not a friend of the poor but of poverty” is a rather strong quote that sticks out.
I felt kind of uneasy, and for more reasons than that my powerpoint slides example was being put in question…and that I might have to find a replacement. The feeling of unease came from having to question some long held comforting thought that MT, or ST now, was an unconditionally good person. In this increasingly cruel world we live in, where evil really does sometime seem to reign supreme, are we to be denied even the small comfort of having those very few good role models around?
Of course I totally realise that the opinions expressed in those articles can be counteracted by countless opposing ones. And for sure no matter what one might want to criticise Mother Teresa for, there are countless people much more worthy of criticisism who have done much more evil to the world and who continue to be celebrated. But once the initial discomfort that comes with putting long-held truths in questions was gone, it occurred to me that at the end of the day, ST is a regular human being, prone to good and bad, selflessness and selfishness. And that just as some of the accusations might be exaggerated, so for sure is some of her goodness. And if I want to be really cruel, maybe the fact that she is a religious icon (given my extreme distrust of all religious institutions) should have in itself been a warning sign for me that something is not as it appears.
But on a scale bigger than even ST herself, this for me became yet another spectacular example of big things in our world breaking apart and falling down. Not only are we in an age where we are questioning the policies and impact of big countries, of systems of governance, economic systems, politicians, lobbying groups, multinationals, media with agendas, and even some values and principles….we are in an age when even someone so supposedly “straightforwardly unquestionably clearly” good as Mother Teresa is also being questioned. Nothing good or bad will be left unquestioned or undoubted. Turmoil and half-truths and doubt will become the norm, and very few things if anything will continue to be held as absolute truths. Even God is increasingly being questioned, not by the likes of me of course who have done this for years, but even by those who have been average believers. This, clearly, is a period of big change and big transition, the age where everything will be put in question. Some like to say we are entering the Age of Aquarius, and that this questioning is a good catalyst. They say we will be in a better place once we have passed the pain and disasters that accompany change, and that it is for the good of humanity in the long term. Maybe we are, or, equally likely, maybe we are headed towards a Mad Max world. In all cases, that destination will most likely not be reached within our own lifetimes. But in the meantime, what to do? Where to find refuge and anchor to help us weather this storm of change and its accompanying anxiety? Take cover people, and find shelter in your small communities, and in the small heroes, not the big ones, that are all around us. Or become your own little heroes! Nothing big is here to stay any longer…no big countries, no big systems, and certainly no big larger-than-life people. In the meantime, there are small heroes everywhere you look around, trying to do their little thing as best they can. Support them or become one of them. As for me right now, all I need is for one of them to be as charmingly charismatic as MT to replace her face on my powerpoint slide!