A woman wears a burkini on a beach in Tunisia. Photograph: Fethi Belaid/AFP/Getty Images 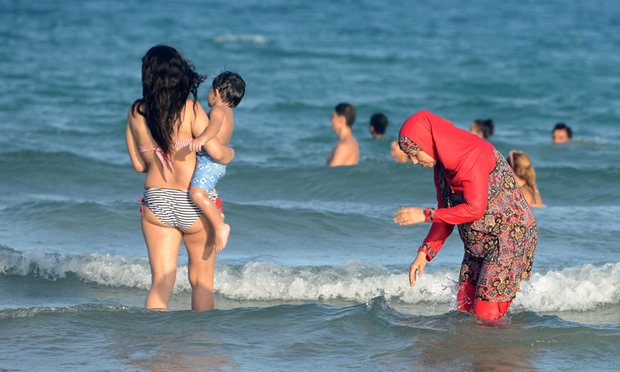 France and the world have been taken over this week by the debates over the decision of a growing number of cities to ban the so-called burkini – the all-covered-up swimsuit that some Moslem women are wearing at the beach. Opinions have spanned the spectrum from defending people’s rights to do what they want as long as it’s not against the law, to defending Western culture against this onslaught it is facing from Middle Eastern immigrants. It is not an easy issue to take a stand on, and in my case one where my heart and my mind want different things…but I will attempt to state my thoughts.

Before the burkini, let us for a second address the issue of the niqab (the total head and face cover in daily clothing) which some counties are banning and which others are increasingly uncomfortable with. I am unequivocally, without any hesitation, fully against the niqab and in full support of making it illegal. Not only does it have no religious basis whatsoever (in fact, even the hijab, which is the covering of the hair but not the face, is contested by some scholars as truly required in the Islamic religious texts), but I say even if it did have a religious basis, it should still be banned! I believe it is completely oppressive to women, and no argument in the world can convince me that any woman would willingly choose to live with her face covered if some perverted male or religious man had not forced in her head false beliefs. But not only from her perspective: I also think from the perspective of other human beings –us- having to interact with a faceless person is not only extremely uncomfortable but can also border on being a security risk these days. So..to cut a long story short, go ahead and ban all niqabs!!

The issue of the burkini is more complicated. On the one hand, it is in the opinion of most of who wear it (some are wearing it as a form of skin protection on the beach

) a religious requirement, and depending on how strict of an interpretation of religion you follow, you might genuinely believe that. On the other hand, wearing it does not pose any security threat and you can still clearly see the facial features of the person, so there is no argument against it on those grounds. One can clearly and rationally come to the conclusion that banning it is a clear violation of the rights of these women, and comes down to an act of discrimination. One can also rightfully worry about where this slippery slope might lead. How will we decide what to ban and for whom?

But there is something that I must admit to. The above argument is a rational one. Emotionally, I really do not want to see burkinis or even veiled women jumping in the water all dressed up when I’m on the beach anywhere, let alone on the beach in France! I really don’t. I admit, and I know this is not at all politically correct but I’ve never been politically correct, that this is an ugly sight to see on the beach. It might be an infringement on their rights to ban it, but it is also in infringement on my aesthetic rights to have to endure it. Maybe one or two will go unnoticed, but will there forever be only one or two?

And it is this last question that is at the very heart of the issue. I will use Egypt, which has been my home base for the last 10 years, as an example of the point I want to make. Egypt for the most part of the last century was a beacon of arts, film, theatre and culture in the Middle East, and characterised by an open-minded, tolerant society that very much appreciated and celebrated those things. Egyptian society today, when looking back at pictures of that bygone era, almost does not recognise itself. Starting from the way people dress on the streets, to the general values in society, to social norms, one would think this was a whole different country. One maybe cannot blame such a transformation on any one single factor, but there is no doubt that the increased Islamization of society, brought on by the large numbers of Egyptians who went to work in the 1980s and onwards in Saudi Arabia and came back with money but also with a new culture, is a major contributing factor to this radical change in the face of Egyptian society. I don’t know what the academic or scientific explanation is, but there is no doubt as demonstrated in the example of Egypt but of course in many other places as well, that somehow people who are more conservative, more intolerant, and more convinced that their way is the one and only divinely inspired way, manage to eventually alter the face of the entire society as soon as they gain a foothold. To use a very simple example: people in Egypt now of all convictions and levels of religiousness have generally replaced the greeting of “Sabah El Kheir” (Good Morning) with the Islamic greeting “Assalamo alaikom” (Peace Be Upon You), to the point where if you use the former nowadays, you really stand out. And there are many more serious examples of how the obstinate, doctrine-driven few can grow to become the influencers of entire social norms.

I certainly do not want to ever go to a beach in France, or a street in the heart of Paris, and confuse them for their counterpart in a Middle Eastern city. So what to do? How do we reconcile the rational mind with the emotional heart? When I was 14 or 15 years old, we went as a family on a vacation in St Tropez in the South of France. One day on the beach we decided to all walk along the beach to the section that was reserved for the nudists. It wasn’t exclusive and other people could sit on the beach there if they liked, but it was predominately occupied by those who preferred to suntan and swim in the nude. It was the first time myself, my siblings, or even my parents had been to a nude beach, and I remember our excited embarrassment and how hard we had to fight to contain our laughter. My mother still cracks up when remembering the group of naked men playing basketball. The point is, that group of people, who wanted to do something outside the general norm, had complete freedom to do it but were doing it in their own section right next to the other, “more normal”, section. After we all had a great laugh, we of course walked back to the regular section because it would have been uncomfortable to be in swimsuits in the nude section. There are sections on beaches today reserved for people with pets. There are sections for adults only, no children. Why is it that we cant have sections that are more for women who prefer to bathe in burkinis? How is that different from people who prefer to bathe in the nude? Both are on the fringes of the general norm.

And at the end of the day, that is exactly the point. France should not be fighting the burkini, which is merely a symptom, but rather it should be fighting to preserve it cultural norms. Burkini-clad women should have all the right to go to the beach, but since it is outside the “norm”, it should be in areas designated to be “burkini friendly”. Other non-burkini wearing people can still go there is they like, but burkini-clad people should not be offended that they are not admitted to the general beach, just like nude people have not been offended for decades when they also had areas designated for them. The real issue is to identify the cultural norms, the values that France (and of course any other country facing similar cultural clash issues) believes to be at the heart of its social system, and then make every effort to indoctrinate all newcomers and immigrants to France in those values. Newcomers should understand that this society is about secularism, freedom of thought, celebration of the arts and music and dance, etc etc etc…and that they, the newcomers, will not be welcome if they do not embrace those values that their adopted society has identified as “the norm”. Inevitably interaction will happen and societies evolve; but the point is, France should be fighting to preserve what it values by actively promoting what it values to new comers in an inclusive but firm manner, and not appearing to be fighting a silly fight against a burkini. The real threat is much larger than that.

The experiment of moving to the mountains