Freeing the Mind: An Encounter with a Sufi Master 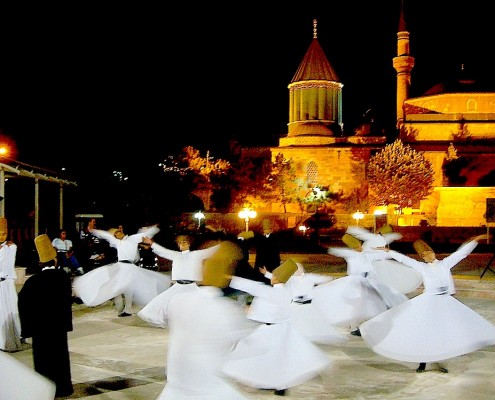 I had barely been back in Beirut for a few days after my 7-month sabbatical, when a friend invited me to a special dinner party at someone’s big luxurious apartment in Ramlet El Baida in Beirut. The occasion was in honor of the late Sheikh Muhammad Nazim Al-Haqqani, a highly revered Islamic Sufi scholar and at that time the mystical leader of the Naqshbandi order, a branch of Sufi Islam. Sheikh Nazim was based in the Turkish part of Cyprus among a community of his followers, and was on a rare visit to Beirut. His followers had organized this dinner in his honor, to congregate the local community and allow them a chance to meet their spiritual leader, and so it was that I ended up in the midst of about 150 people as I recall in this fancy Beirut apartment.

I had spent my sabbatical between India and Nepal, with a few days towards the end in Thailand. It remains one of the most powerful and enlightening experiences of my life, and at the time I had written a few notes while I was on it that I have included on this blog. Besides meeting the Dalai Lama in his base in Northern India, visiting the Sikh Golden Temple, experiencing Varanasi, and trekking the Himalayas, one of the absolute highlights of the trip was the retreat I spent in a Buddhist monastery on the hills overlooking Kathmandu in Nepal. It was there that I learned the basics of meditation and Buddhism according to the Mahayana tradition, and it was there that I experienced inner peace and a sense of completeness for the first time, combined with a spark to dig deeper. I still remember being woken up at sunrise to the sound of a tinkling bell and having to walk along with 50 other people from all over the world to the main temple in silence to do the morning meditation.

At the end of the retreat, when I was gently asked if I was interested in “taking refuge in the Buddha” (i.e. formally become a Buddhist), I politely declined. I was on a journey of self-discovery and at the beginning of developing my thoughts on who I was and what I believed in, and I did not (as I do not today) want to assume any labels or be boxed in any definitive category. Ideas are much more important and much more fluid than labels and boxes. But during the retreat, my ideas had not yet fully matured to rejecting any sort of organized religion including my own, Islam, and I had not yet become fully OK with making my own sort of best-of cocktail from many spiritual traditions. I was still seeking at some level to find a compromise between Buddhist philosophy, which was resonating extensively with me, and my own Moslem background. In fact I was able to draw a lot of comparisons and parallels not only in the chants, vibrations, and postures, but also in some of the core ideas. At the time, this led me to think that maybe I should explore Sufism, the spiritual side of Islam, which I knew very little about at the time. And so to be invited barely a few days after my return to Beirut to meet one of Sufism’s greatest masters alive was too good of an opportunity and maybe not so much of a coincidence, that I of course immediately accepted.

The apartment was packed, shoulder-to-shoulder, with many people sitting on the floor against walls. In the center of the main living room was Sheikh Nazim of course. It was not difficult to be struck by this awesome man and taken in by his magnetic aura. He had this very rare mixture of extreme astuteness and overflowing wisdom, coupled with extreme kindness and humility. He seemed completely uncaring of the opulent surroundings in this living room or of the veneration that everyone was showing him. 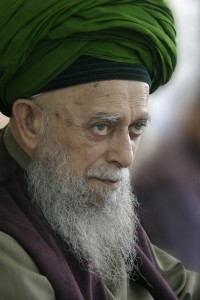 An hour or so into the evening, I found out that many people were vying to get a private minute with Sheikh Nazim where they would seek his blessing or ask a private question. I was asked if I was interested in asking him anything privately and of course I said yes. As I waited for my turn, I kept running in my head the various questions I could ask. It felt like a once in a lifetime opportunity not to be wasted.

Finally my turn came and I approached him. I bent down and whispered my question in his ear: “I have just come back from a retreat where I studied Buddhist philosophy, and I felt very much in tune with the teachings and they made me feel at peace. What is your opinion of this?” It might have been a little unorthodox to ask a scholar in a monotheistic faith about another non-monotheistic one, and maybe I intended to test the reaction as much as I was seeking an answer to my question at the time. He looked at me and said “My son, when you go to buy gold, does it really matter if the coins are British or Ottoman or Russian? In the end it’s all gold, no matter where it was minted. It is the same when you seek Wisdom and Truth. It is not so important which path you choose to get there, as long as you are on some path!”

This encounter is like a dream in my head. I don’t even remember who invited me to go to that dinner. But it was my first up-close encounter with Sufism, and Sheikh Nazim and his words made a lasting impression on me. It was an encounter that pushed me along the path of freeing my mind from any doctrine and prescribed system of beliefs, and focus on what is essential, what is at the heart. My subsequent encounter with Sufism left me a little less enchanted though, and I will discuss it in next week’s post.

Do we really need all the stages of the Path of the Sufi? هل نحتاج...