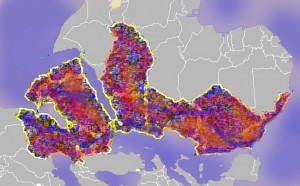 I recently received an invitation to attend the pilot event of an initiative called Reimagine MENA, organized by my friends at 3BL Associates, based in Bahrain. Hard to resist attending an event with that name! The event was held on April 21 to 23, in anticipation of a wider launch in Q1 of 2017.

Prior to attending we were asked to think about what we thought of MENA and how we would like to reimagine it. The below is my own personal opinion and of course does not represent the views of 3BL or the event. The below harsh talk is mine and my responsibility alone!

If you are an Arabic speaker, here also is a video of an interview I gave at the event in which I say my opinion on what is needed in the MENA, admittedly (and a little regrettably) in a much more polite manner than what I wrote below.

When I think of the MENA region now, I imagine a flat, monotonous, very heavy piece of thick wood…barely alive, dead, monolithic.

It has some imperfections for sure.. some knots and irregularities that have risen a few millimetres above the surface, maybe have tried to escape the prison of the block…but they are barely noticeable when you look at the block from a distance.. and most likely will eventually either get sanded back in, or will jump far enough from the block to land on another continent, somewhere else.

It is a block that is pretty depressing.. pretty static.. lacks creativity…lacks critical thinking…patriarchal.. blasé…accepts everything it is told as a given. For the most part it is joyless, or the joys it thinks it enjoys are materialistic and greedy and all about consuming and buying and eating and blingbling and in the end, at the core, most of its molecules are like lifeless robots..The block likes to use empty, meaningless, nausea-inducing phrases like “we should uphold the values of our society”!!!!

Very few of the molecules derive pleasure from thinking and debates and ideas and innovation and creativity. The ones that do are the knots and imperfections, the ones that rise a few millimetres above the surface of the block, only to be sanded right back unless they rise high enough to break free and end up landing on another continent.

The block is also a coward. It is afraid of asking questions, of challenging the status quo, of upsetting its friends or rulers or family, or anyone. God forbid that it voices an independent thought! And the block suffers from the root of all evil: the omnipotent, oppressive, heavy, rigid, unquestionable, always right, not open to reinterpretation, presence of religion. It stifles everything. It keeps the block’s brains busy with silly and trivial things. It kills in the bud any attempt to question or update or think or criticize, and the killing happens swiftly like a swatter kills a fly. The majority of the molecules of the block are afraid to rise above it for fear of being swatted right back into it…

So how would I reimagine MENA? I would like to see it as a block where the small imperfections that rise a few millimetres above its surface have grown and expanded and taken root. I would like to see that this block has lost its uniformity and has instead become a fusion of many organic, living, breathing, thinking sub-entities, each free to express its identity and lifestyle and thoughts, while still forming a big but irregular block.

It is a block where thinking and innovative ideas have started flowing from one sub-entity to another; a place where many have chosen to update religion and update their understanding of it and update their relationship with it; a block where the holy is still holy for those who want to keep it holy, but it is not so holy as to be untouchable. A block where the molecules are not threatened and do not have existential identity crises if someone dares to voice an opinion that criticises what they believe in! Instead, when that happens, they either try to push back with a rational argument, or simply and easily shrug and say “enta 7orr fi ra2yak!!”

It is a block that is capable again- like it used to be only a few decades ago- of creating the sort of experiences that would draw a loud, unashamed, joyful, orgasmic scream of elation when hearing Om Kolthoom sing about love and passion!

This is the MENA I would like to see, as I have a conviction that only the free flow of ideas, the spirit of innovation and non-conformity, and the positive interaction between different groups can advance any region.

And this is why I am starting a blog. It is a simple, small attempt to grow one of the imperfections. Give it strength, give it a voice, allow it to thrive in this oppressive desert environment, and maybe be an example to other imperfections to do the same thing, so together we can all push back and grow and take over the mono-block, and become the block itself rather than just imperfections rising a few millimetres above it, waiting to break free and land on another continent!

We do not believe in Tolerance! (Or here’s what you need to believe in...

This is how we will build countries that look more like us! هكذا سوف...