A 7-Month Sabbatical: Meditating and Trekking (5/5) 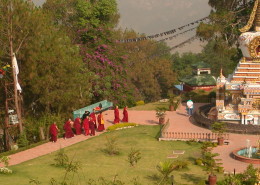 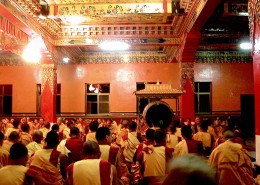 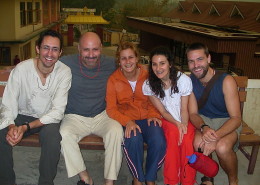 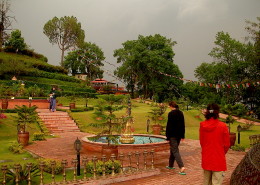 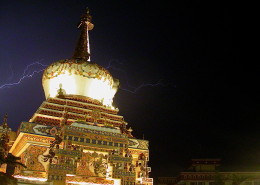 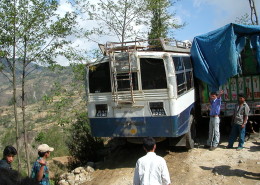 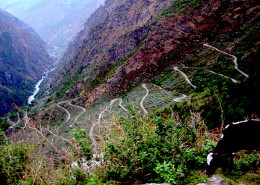 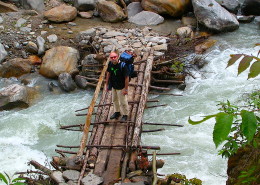 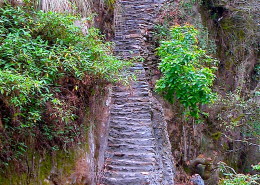 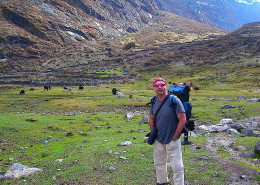 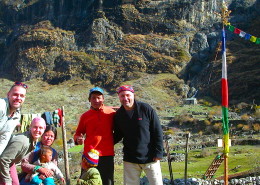 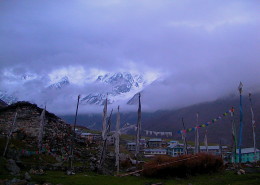 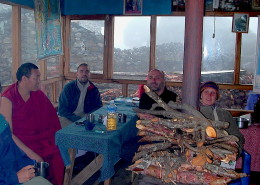 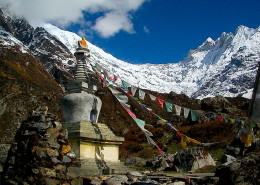 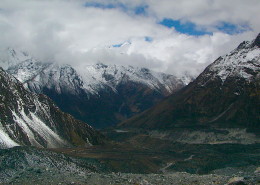 The lack of morning café latté and double chocolate chip muffins for breakfast notwithstanding, the retreat at Kopan proved to be one of those life experiences that affect you one way or another, consciously and sub-consciously. Our batch consisted of 50 people from over 20 countries, so that in itself was a fantastic experience. I won’t go into the details of the actual meditations or teachings; its enough to say that regardless of your level of interest in Buddhism as a religion or philosophy, and even if like me you have no immediate intention of adopting any particular religion or label, one of the best gifts you can ever give yourself is ten days of isolation from the rest of the world, and certainly from your daily life, in a setting such as the one at Kopan. Being in an environment where for ten days all you are doing is self-introspection, opening yourself to new ideas and questioning (confirming or rejecting) old ones, examining your attitudes, biases and dogmas, is a pretty effective step on the road to achieving that inner peace that seems so elusive to a lot of people. You might even end up convincing yourself that some of the ideas about how to lead your life that you have intuitively believed for years are actually supported by traditions thousands of years old…This was one of the most profound discoveries I made during the retreat.

Inevitably, things come to an end, and as always people try to extend a good thing just a little further. The retreat was officially over, but most of the people who did not have immediate plans afterwards decided to “hang out” together a few more days in Kathmandu, and solidify any new connections that had developed. And so it was back to Thamel for most of us, where everyone would do their thing during the day individually or in small groups, and then meet up with the larger group for breakfast, dinner, and drinks. Those first few days were spent getting re-acquainted with “real-life”, which is a little ironic since this whole trip for most people is not really “real-life” anyway.

Eventually, people began moving on either towards their next pre-planned destinations, or to whatever it is they decided to do next. A lot of people with no fixed plans ended up teaming with people they had met at Kopan to go on the next adventure, and so it was that I found myself getting ready to go trekking for a few days in the Himalayas with a couple of other friends. An afternoon spent around the shops of Thamel confirmed the saying that “sometimes the clothes make the man”: I got myself one of those humungous backpacks that I thought I would never ever buy (let alone contemplate carrying); a fleece; a gore-tex jacket; a water bottle with water purification tablets; and a few other odds and ends. I convinced myself I was a professional trekker…

One day before leaving for the mountains, four of us rented motorcycles and set off to explore the valley and mountains around Kathmandu. I only mention this because it all came together at the very last minute as a result of some changes in plan, but ended up being one of the most amazing days I have had on this entire trip. Once again, the least amount of planning and list-making, and just “going with the flow” and leaving enough room for things to take care of themselves, led to the most satisfying experiences.
The bus ride from Kathmandu to where we were beginning our trek in Langtang National Park around some of the highest peaks of the Himalayas lasts for 10 hours. If there was ever a time when I surrendered my life totally to fate and the skill of one person (in this case, the bus driver), it was this. Anything and everything about this bus was beyond reason: the disturbing screeching sounds its brakes were making; the way the people (and the occasional chicken) were packed inside; the way more people, chicken, luggage, and vegetables were piled on its roof; the impossible goat-paths carved on the side of sheer cliffs and the hairpin turns that were serving as its roads; the vertical landslides and waterfalls it was balancing its way through; and the reverse gears that helped it back up and hover over the cliff’s edge to let another bus coming from the opposite direction go through. I eventually lost count of how many times I was catapulted off my seat and bumped my head on the roof of the bus. There were times when we refused to look outside the window, and others where we all leaned to one side of the bus hoping to shift its center of gravity away from the ravine, to the amusement of the locals. And the icing on the cake came when an elderly Nepali woman slapped my leg after I stepped on her sari one too many times…All this while a 15-minute-long Indian song, which we dubbed “the epic song”, kept blasting over the bus’ speakers over and over again ad-nauseum.

Then came the trek itself…if you’ve ever wondered what it would be like to stretch yourself way, way out of all your comfort zones- physical and psychological- try going on a trek in the Himalayas. Carrying your back-pack and other gear, you walk for over six hours a day all the way up a mountainside, only to come back down and then do it all over again. This goes on and on, until you are drenched in sweat and every muscle in your body is screaming. And the daily destination? Here are some highlights:

– Small hamlets sitting in the middle of nowhere at thousands of meters above sea level, where no roads or cars go, and where the locals have to trek for 12 hours then take the same 10 hour bus-ride two ways if they need something as simple as an electrical socket.
– Wooden shacks that serve as guesthouses and your home for the night. The rooms themselves are often not more than boxes made of planks of wood, and the gaps in between the planks are sometimes so big the rooms might as well have been open-air. Needless to say, the “walls” separating one room from the other are strictly for decorative purposes.
– Common rooms where everyone hangs out at night around a fire, chatting and drinking endless cups of tea, or having food from a menu that is identical from one guesthouse to the other except for the prices which keep increasing in direct proportion to the altitude.
– Outside showers, many times with nothing more than a hot water bucket. A solar-heat-powered shower is the occasional treat.
– Heavy and thick comforters that have weird, musty smells emanating from them, and which are your only protection from the cold at night, as you lie on thin mattresses laid on wooden planks. You find yourself trapped on these “beds” all night, weighed down by the 100 kg comforters, afraid to move so as not to let the freezing cold under the covers, basking in their lovely smells until morning.
– As for the “facilities”, I will spare you the gory details…
Pretty soon you find yourself questioning what you thought were unquestionable truths about what humans need to live, and marveling at your ability to stretch yourself so much. But the biggest surprise comes when you realize that despite all of it, you are actually having an unbelievingly good time- and that’s a little disconcerting, since practically everything of your usual pleasures is thousands of meters down and out.

So then you try to analyze why that is, and as always there is more than one reason. The most obvious is that you are constantly surrounded by breathtaking views of nature in its most glorious manifestations. There is nothing you are looking at that is not awe-inspiring. Even reminding yourself of where you are, at the doorsteps to the top of the world, a few kilometers from the Tibetan border, is in itself pleasurable. And there is something about the energy of peaks soaring over 7000 m that is very calming.

In addition, you are fortunate to be traveling with two of the most laid-back, fun, and genuine people you could ever hope for. Whether it comes through by supporting each other on those strenuous hikes, or through playing cards, singing out loud, and sharing very intimate personal details around the fire at night, comforting human connections are not lacking. There are no masks, no attempts at image projections, and no worrying about what to say or how to say it.

But still, there is even more to why you are so happy than stunning landscapes and great company: You have almost no decisions to make, and on the rare occasion that you do, the choices are extremely limited. You have no newspapers to read, certainly no email to respond to, and you have no clue as to what’s going on in Kathmandu, let alone the rest of the world. There is only so much planning you can think of doing as the weather might change any minute and force you to reconsider, so not much control over things there either. You take a second to decide what to wear in the morning, since you only have two t-shirts and one of them is usually dirty (or let’s say, dirtier than the second). You don’t even have to decide whether to shave or not- the lack of hot water and any mirrors often make that decision for you. And you’ve learned the food menu by heart, so you pretty much know what you’re going to be eating for the next few meals…So in summary, life is simpler and more basic than you’ve even known it to be possible, and you have very little control over much of anything. You go with the flow, and letting go causes you to be happy. You have a conversation with your friends about how to incorporate some of this in your “real life” once all this is a memory.

And so the trek ends, and here I am back in Katmandu planning out the very last few days of this trip. Even today, there was a last minute development that made me decide to spend a few days in Thailand rather than return straight back to Beirut.

Since this is my last update for now, I will mention that over fifty of you have asked me on email about the lessons learned from this trip. First, I’m not sure I have yet fully processed everything I have seen. Second, even for the little processing I have done, trying to summarize in a few profound-sounding statements will not do it justice. And third, I have to save something to talk about when I get together next in person with you all. But in the meantime, I can paraphrase from an Indian guru and use his words to describe the best lesson learned: “The best journey is inwards”.

A 7-Month Sabbatical: Dentists in Kathmandu (4/5)

Why this blog? لماذا هذه المدونة؟