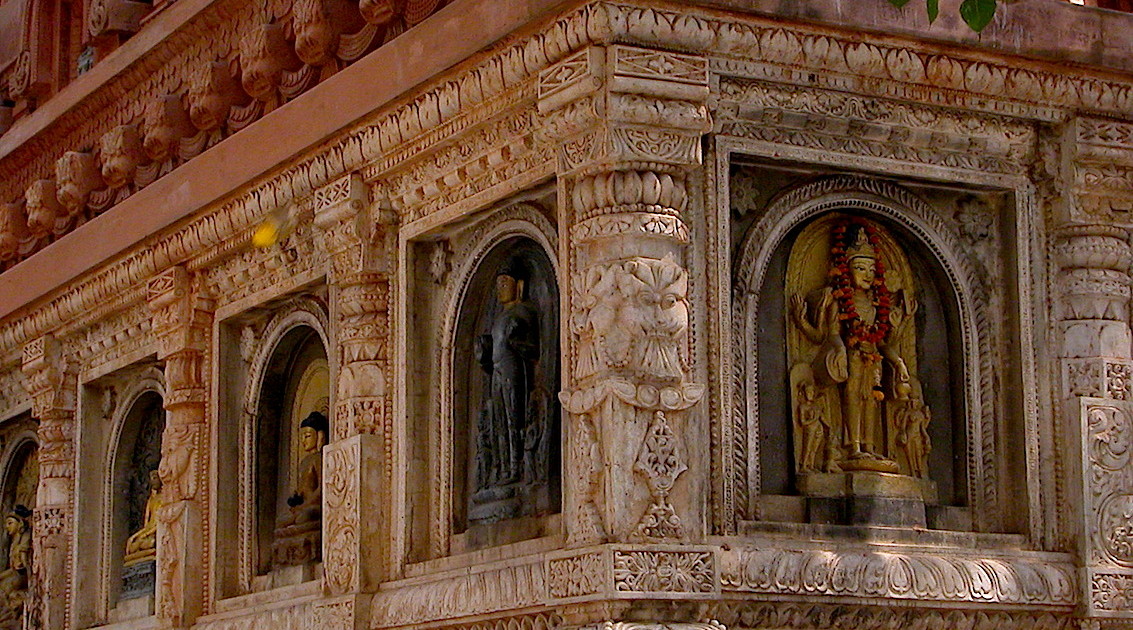 The Temple at Bodh Gaya 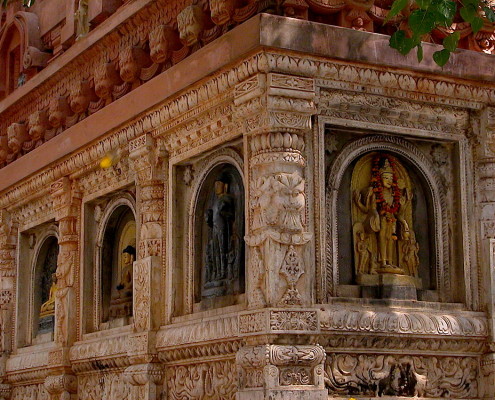 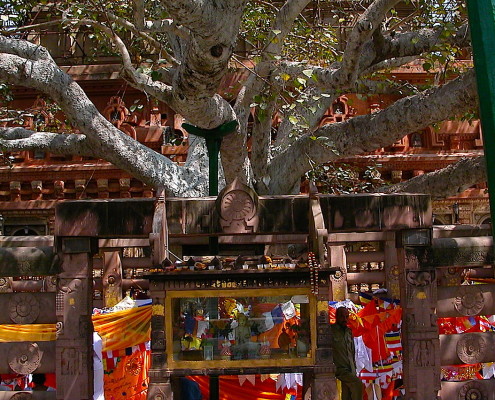 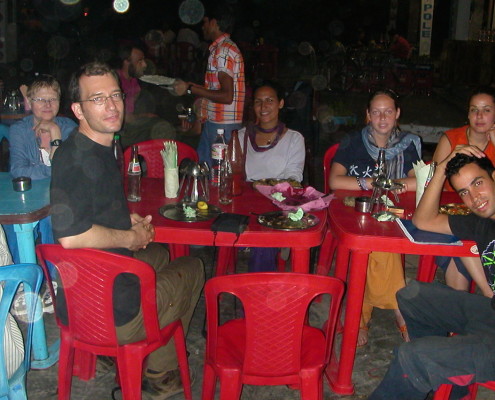 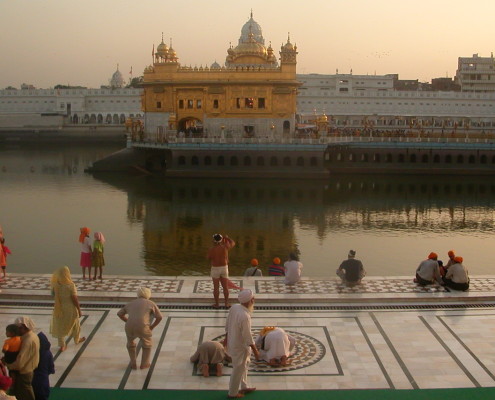 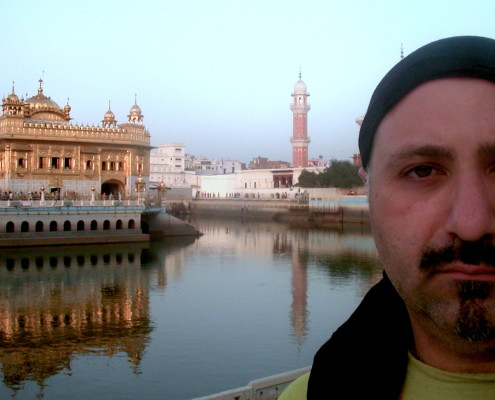 I had promised myself not to send these updates more often than once every 3 weeks or so, but there are a lot of experiences I would like to capture (even if just for myself) so I’m breaking the rule. Feel free to hit the “Delete” button…

I made it through 3 extremely colorful days in Varanasi, cremations included. For all of you who asked, no, I did not even dip my toe in the holy Ganga, nevermind take a dip! In fact when I took the requisite early morning boat tour to watch the sun rise over the temples, I made the boat man pull the boat way up on the bank so I could get in without a single drop of holy water touching me.

From Varanasi I went on to Bodh Gaya, a relatively short 5 hour train ride away due east.
Bodh Gaya is a very small town, with about 20 Buddhist temples and a giant, 25m high statue of the Buddha all next to each other along the main road. It is however a major Buddhist site, since it is the place where the Buddha first attained enlightenment under the sacred Bodhi tree, a direct descendent of which is still here, next to the largest temple.

My plan was to spend a couple of days here before heading up north to Dharamsala, where the Dalai Lama is currently giving daily talks throughout March. But it was soon obvious that I would be in Bodh Gaya at least 5 days, even if I changed my destination to somewhere else. That is just the nature of things over here, and I will spare you the painful details of dealing with Indian bureaucracy in general, and Indian Railways in particular. I caught myself beginning to get frustrated with the inefficiency of the system, and worrying about the next thing instead of enjoying the present moment. Then I decided on just letting things take their own course at their own pace, and began enjoying the city much more.

In the middle of the main road in BG there is a strip mall containing a few “General Stores”, a couple of travel agents, an Internet Café, and 2 restaurants. “Restaurants” might be a bit of an overstatement though. Basically, they are small, extremely cheap looking, neon-lit, kitschy indoor places with a few tables, and then a number of outdoor tables and chairs randomly scattered out front. Nothing that’s going to get any Michelin stars anytime soon. The menu is like one of those endless booklets you get in cheap Chinese restaurants, but the selection of cuisines ranges from basic Indian dishes and thalis all the way to Tibetan momo, going through Cornflakes, any-style omelets, pasta, and muesli.

One of the two restaurants, Om Restaurant, is the incarnation of everything I would normally run away from in my normal life, starting from the cheap, dark green plastic table coverings, to the wobbly red plastic chairs, and not to forget the very ominous-looking rack of cutlery and sticky honey jars that sits on every table..But for some bizarre reason, Om is everyone’s favorite hangout in town. My “friends” and I were very soon calling it “the clubhouse”, where we are exclusive members. If you’re new in town, you can always find someone to talk to at Om. If you’ve been there for a couple of days, then at any moment you stop by for a meal or a “ginger, lemon & honey” tea, you are sure to find some people you know. All foreign travelers converge at one point or another on Om, taking whatever seat is available, whether you know the others at the table or not. People swap travel stories and tips, ask about each other’s reservations, or make plans to meet up in a few days or weeks somewhere else. Even I made plans to meet some people in Katmandu in a few weeks.

Strange bonds are formed at Om…People move from total strangers to your new “best friends” in a matter of minutes. Even more reserved travelers end up getting roped into one conversation or another. Entire relationships that might take months or years to build in normal life are formed and consumed in days and sometimes hours: the first unsure looks you exchange with an interesting-looking stranger, risking the first contact, forging the friendship, and eventually saying goodbye and exchanging emails or promises to meet at another destination. Time is too short and the need for relatively familiar human interaction too great for most people to get hung up by whatever it is that would normally have stood in their way. You end up forcing yourself to get over at least some if not all those obstacles.

All the temples of Bodh Gaya and any related spiritual enlightenment to be had may be completed in the first two days. Any additional time anyone spends in the city is either because they are Buddhists on a religious pilgrimage, or are wannabee Buddhists (potentially the “trendiest” philosophy if not religion right now), or most likely, it is because they got caught up in the strange, soothing vibes of the town, the essence of which is perfectly captured by Om.

And so, after the first two days of temple-visiting, and having made a decision to just wait for my train reservations to magically materialize to whatever destination works out, I gave in to the Bodh Gaya charm. The next three days were spent in the luxury of whimsical, purposeless existence: easy breakfasts at Om with “best friends”, walking around the market, doing some reading, catching up on email, taking a nap, having tea at Om , going to the hotel to shower, back again to Om for dinner with same “best friends” and checking out the newcomers…Everyone seemed to be enjoying the pace and peace that this little town was offering, and although we were all talking about our next destinations, no one seemed in a particular hurry to get there.

In Bodh Gaya just as in any other place on the tourist routes of India, you quickly learn to tune out the identical questions that you are constantly bombarded with on the streets by beggars, children, fake guides, touts, and just about everyone else. Use your imagination to read these with the appropriate tone and corresponding hand/ head movements:

Hello Sir! What’s your name??
What country you from Sir??
Where are you going?
Want to come to my house?
Want to go to my uncle’s shop?
Have a biscuit?
Have one rupee?
Rickshaw? Rickshaw, Sir? Rickshaw?
Want “grass”, Sir? No? How about “Mushrooms”? Very good quality..

On the subject of this last question, I learned of a version of lassi that I had not been familiar with. You all know lassi, the yoghurt drink we have at Indian restaurants which comes in various flavors: sweet, mango, salted, etc..Well, over here, there is yet another version: Bong-Lassi. Yes, that is lassi mixed with exactly what you’re thinking of. Apparently in places like Goa and Rajasthan, you order it by its real name, Bong-Lassi, but in less grungy places like Bodh Gaya, you use the more politically-correct “Special Lassi”…..

Bong-Lassi was the subject of discussion over dinner last night at Om’s. The long table outside consisted of an Irishman, a Frenchman, a Japanese couple, 5 Israeli men and women, 3 Germans, an Italian woman, a Dutch woman (who is now 60 years old, but who apparently when she was 25, was a belly-dancer in Beirut!!), and myself. As it turned out, my German friend Stefan and myself were the only two at that table who had not yet tried Bong Lassi. Everyone proceeded to tell us about their own experiences, good and bad, and give us tips on how and when (not if!)…The 21 year-old Irish guy was a strong advocate in favor, while the German husband and wife team had tried it together on their first trip to India 3 years ago, and had a nightmarish experience…

As it turned out, I eventually got reservations on an overnight train to Delhi, where I am now writing this. I will only spend the day in Delhi then take another overnight train to Amritsar for 2 days. Amritsar is all the way up north next to the Pakistani border, in the Punjab. It is the center of the Sikh religion and contains the famous Sikh Golden Temple. From there I finally hope to make it to Dharmasala, a mere 7 hours by car away, and hopefully catch the last 4 or 5 days of the Dalai Lama talks.

I would have really liked to describe what an Indian train is like, but this update is getting too long. Suffice it to say that you might describe them as “Bazaars on Wheels”. Even in my air-conditioned, “upper-class” compartment, the cast of characters (including a semi-blind mind with a screechy transistor radio) is something. At every stop, the place is run-over by boys selling all sorts of snacks and drinks, making all sorts of other-worldly noises to advertise whatever it is they’re selling.

I’ll probably write next from Dharmasala. Until then, stay well.

A 7 Month Sabbatical: Overwhelmed in Varanasi (1/5)