A 7-Month Sabbatical: Overwhelmed in Varanasi (1/5) 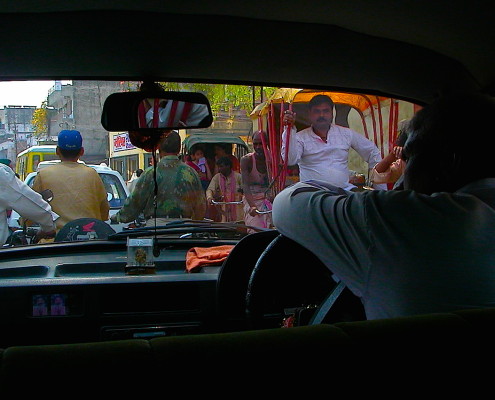 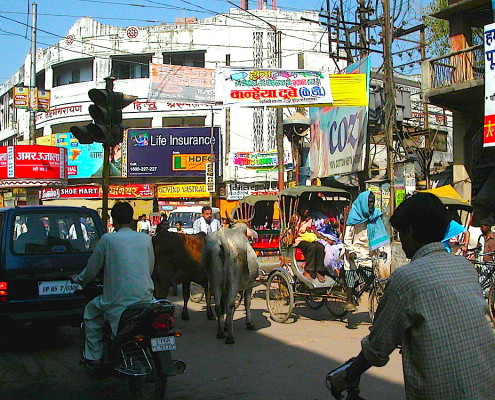 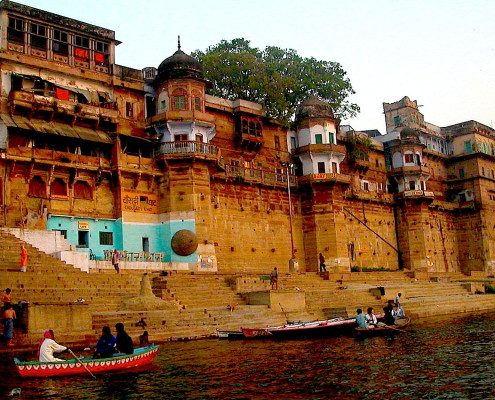 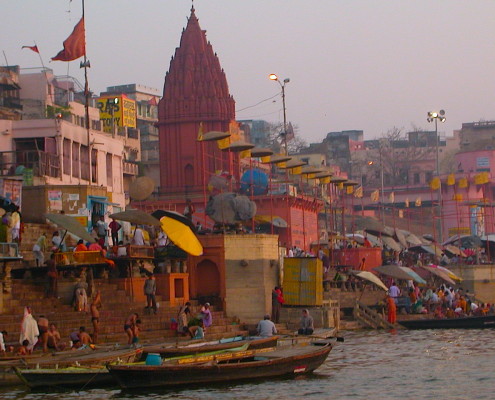 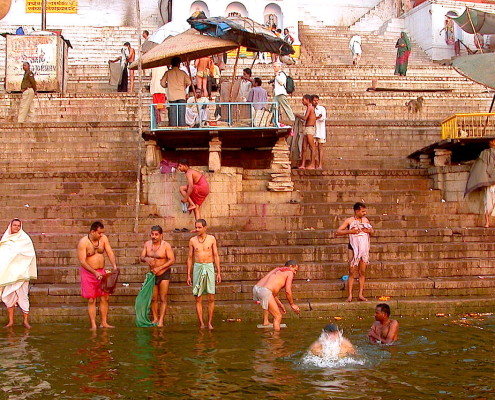 I flew into Varanasi this morning after spending a couple of days in Mumbai. If like me until just a few weeks ago you don’t know what or where Varanasi is, here’s some paraphrasing from my guidebook:

“For Hindus, Varanasi is the holiest place on earth and the chosen residence of Lord Shiva. Those who die in Varanasi are guaranteed moksha, or liberation from the cycle of death and rebirth, no matter what they may have done in their lifetimes. This…..has made the city the chosen residence of 1.6 million people. In addition, countless thousands of pilgrims come here every day to bathe in the sacred river of the Ganga (Ganges) and to pay their respects at the temples and ashrams that stretch all along the riverside ghats, numerous sets of stone steps that lead down to the river. Around the city, dead bodies are a common sight, delivered to be cremated at the funeral pyres accompanied by traditional chanting. Cremations take place right on the ghats, by the water…Very rarely, the bodies of those who can’t afford cremations, as well as those of holy men, pregnant women, and children under 12 are dumped straight into the river, and can sometimes be seen floating in the water. But the river is far from reserved for purely sacred activities. From before dawn until long after nightfall, along with the religious ceremonies, people stroll, play music, and play cricket along the water. Divebombing teenagers crash into it from the steps, while others bathe and wash their clothes. Water buffalo also bathe in the river, and sewers dump directly into it.“

Well, so that is what I’ve come here to see…

The airport is one of those airstrip-in-the-middle-of-the-fields type of thing where you get off the plane, almost grab your luggage yourself, and walk into the warehouse-like terminal building. It is 24 km outside of Varanasi, which puts it in the heart of the countryside, a fact that is extremely hard to miss as soon as one gets into the taxi.

The taxi zips at frighteningly high speeds, spending more time in the wrong lanes avoiding oncoming traffic than in the proper lanes. “Traffic” in this case is exactly what you’d expect it to be- yes, the stereotype is true. It is a mixture of cars, bicycles, cycle-rickshaws, auto-rickshaws, pedestrians, trucks, vans, cows, goats, dogs, and pigs, all happily coexisting, all sharing the road, and my Formula 1 driver honking his way around all of them.

The landscape is the usual mixture of fields, random single story huts and car mechanics, people lying asleep on the sides, gas stations, and more cows and goats.

The city gets nearer: more dense urban fabric as the buildings start coming closer together, roads are narrower and narrower, sewers on the side are clearly visible, signs and electric cables jutting out from everywhere. Finally, the inevitable happens: “traffic”, with all its active components listed above, comes to a sudden and complete standstill. It is nearly 30°C outside.

For the next 25 minutes, nothing moves. Everything and everyone seems to vibrate or shuffle in their place, but no one is able to go anywhere. We (humans, animals, and machines) are collectively moving at the rate of maybe a meter every 5 minutes. Even bicycles are not able to squeeze their way out and move on. For the first time, I am able to take a close look at the faces and creatures around me, some of them less than 20 cm away.

Humanity must have a different interpretation of itself over here. This is tricky territory I am about to tread, but the reality is, at least on the surface of it, “Man” is an altogether different beast over here. Nothing is familiar. The feeling is comically accentuated by the different colors people and animals still bear on their hair and skin, as a result of the previous weekend’s Holi Festival, where everyone sprays everyone with colored dyes. The feeling I have is certainly not that of admiration for the richness and diversity that Mankind is capable of. There is just too much separation for the situation to be so conveniently justifiable.

It’s hard to believe that just four days ago I was in the ostentatious lavishness that is Dubai, where some meals cost me more than most of these people see in six months, or ever. But I am not implying these people are unhappy. I don’t know if they are or are not. There has to be aspects I am completely unaware of. In fact, looking at their faces, one feels a sort of quiet acceptance, an unspoken resolution to keep going almost in a neutral manner. I take a picture of the back of my taxi-driver’s head, which by now is slumped in resignation over the steering wheel. The engine has long been switched off. He only switches it on every five minutes to advance one meter, then switches it off again. A few meters away, there is an almost naked old man riding a bicycle (or waiting to ride it), logging behind him a rickshaw with 14 young school girls, all dressed in smart blue and white uniforms. School bus, Varanasi-style. Every few minutes, some guy decides he needs to “go”, and proceeds to do so on the side of the street in full view of everyone.

I find myself almost wanting to laugh out loud. My particular situation is striking me as very odd and funny…what the F&*k am I doing here?????? I repeat over and over in my head. But its not upsetting- rather, it is amusing, like a riddle I need to solve, to figure out why is it that I have chosen to come here. But I am not attempting to learn any lessons or find answers. For now, I am happy to just observe.

Finally, as if by the touch of a button, it all starts moving again, and a little more than an hour later I am all showered and in the comfort of my air-conditioned hotel room, trying to write this before the memories fade away. I caught a glimpse of the Ganges from the terrace of my hotel, and it was much wider than I expected. But that’s all the tourism for today. I’m going to get some sleep, find some food, an Internet café, and the local travelers’ watering hole. Cremations, floating human body parts, and any insights into the meaning of life will have to wait for me until tomorrow. I’ll probably think about all this some more when I visit the tree under which the Buddha is supposed to have reached enlightenment in Bodh Gaya, my next destination. And I am really, really looking forward to the beaches and parties of Thailand!